Below are a couple of shots of a male and female Bullfinch. A lovely little bird that has had a drastic fall in numbers in the last 25 years (a drop of between 45 and 50%).

The main food is native tree buds, oak, sallow and hawthorn are all eaten with their taste for fruit buds being their undoing. Indeed the damage inflicted on commercial fruit crops gave the bird the status of an agricultural pest, this giving rise to their culling! They also eat soft fruits and seeds and you can see on the photo`s that their beaks are covered in the rowan berries they have been happily munching on.

There has also been a loss of hedgerows with standard trees and agricultural intensification which are both thought to have helped the decline in numbers. 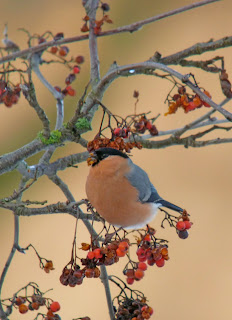 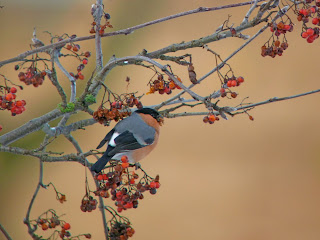 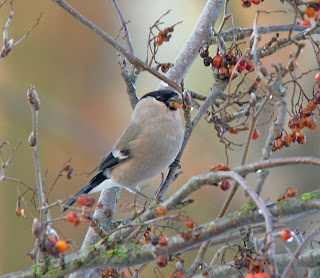 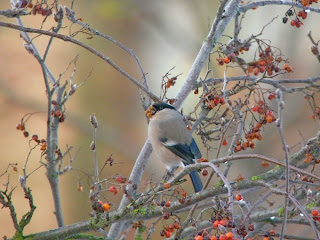 It`s been a while coming, but finally I have seen a fairly large flock of Waxwings and not only that, but they were on my local patch of Peterborough. These birds were seen in a car park of a local business park on Friday the 26th and were still showing today, sometimes down to 20 yards! There were up to 55 birds in total, ranging from 1st winters to full adults.

The Waxwing is a species which has `eruption` years, that is to say that most years we can get 100 or so birds in the whole of the country, but on `eruption` years, several thousand can be present, this is one such year! They breed in northern Scandinavia and Siberia and come to
Britain when their food source is depleted. The favourite food is berries (indeed a Waxwing can eat 2 or 3 times its own bodyweight in a day), rowan, whitebeam and hawthorn, but they also eat cotoneaster, rose-hips and other winter fruits and seeds. On their breeding grounds they eat insects, especially mosquitoes and midges.

The Waxwing is slightly smaller than a Starling with a prominent crest, black bib, small black mask, a yellow tipped tail and a pattern on the wings of yellow and white, with the secondary flight feathers having a series of `spikes` which look like bright red wax, hence the name Waxwing. 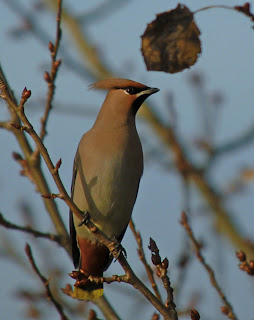 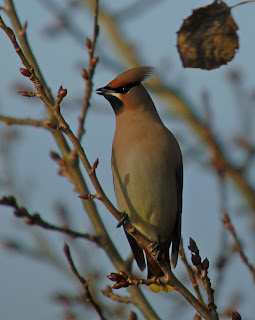 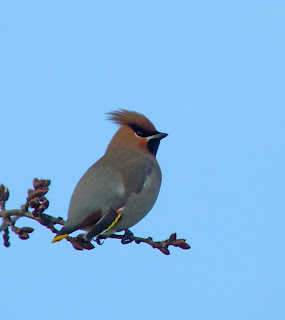 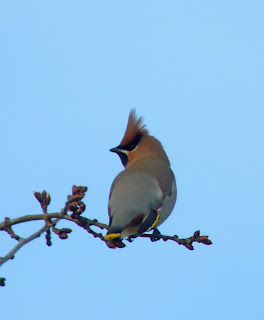 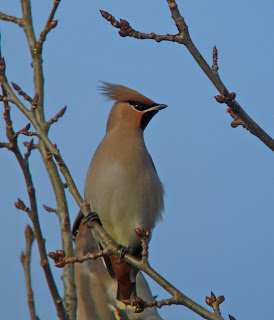 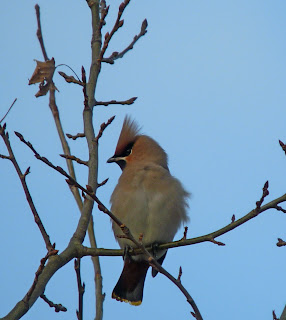 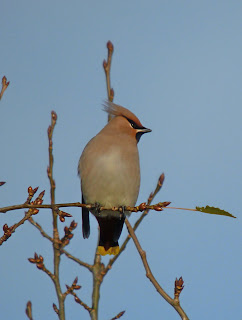 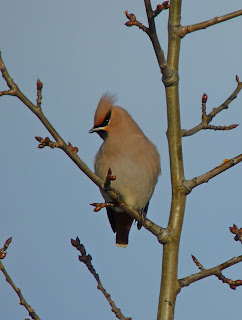 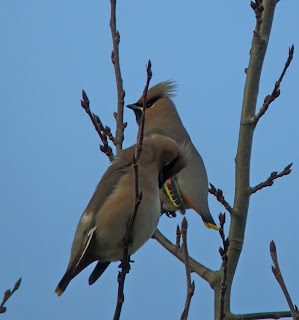 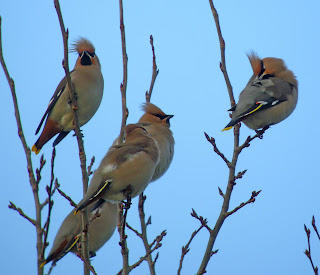 Red in tooth and claw

Those people who view my blog on a regular basis are aware of my feelings towards all things natural. These include the beautiful and the sometimes not so beautiful! What occured at work the other day is an example of the not so beautiful, but this makes it no less fascinating.

I was busily collecting fallen leaves at one of the gardens I `look` after when I heard a scream coming from the rose bed. A horrible, high-pitched affair, sounding like a baby in distress! I looked up to see a full grown adult rabbit held in the jaws of a Stoat! The predator was at least a third in size and probably body weight to its` prey, but it manfully (or should that be stoatfully) killed the rabbit and then proceeded to drag its victim under the nearby shed. The stoat was only killing to survive and whilst not everybody`s cup of tea a true wonder of nature nonetheless.

I am not a blood-thirsty type of person and wonder at the beauty of nature, but sometimes this kind of thing brings home what a desperate struggle our fellow animals have every day just to survive!
Posted by John at Friday, November 19, 2010 6 comments: 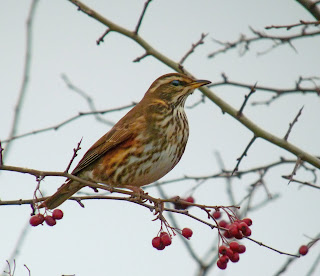 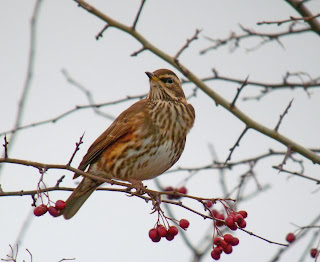 A visit to Crown Lakes in Farcet near Peterborough to try and connect with a Waxwing. None about today, however there were numerous winter thrushes including the above Redwing.


These winter thrushes come to this country in their hundreds of thousands to feed on berries (particularly hawthorn) and other fruit. When the berries become exhausted they start to eat earthworms.


Every year a handful breed in Scotland, but the huge numbers come from Scandanavia and Iceland, with the Scandanavian birds wintering in southern Britain and the Icelandic ones staying in Scotland and Ireland.


A very beautiful member of the thrush family, which is a little smaller than the Song Thrush with rusty-red flanks and underwings, hence the name Redwing.
Posted by John at Saturday, November 13, 2010 7 comments:

An early morning stroll around Woodwalton Fen, an area near Peterborough produced a few birds, not the hoped for Bearded Tits that have been seen recently, but I heard a Cetti`s Warblers` explosive song and got very good views of at least 4 Chinese Water Deer.

This species of deer originates from Asia and was introduced into Britain in the 1870`s, but escaped from the parks in which it was kept and has gradually bred and a thriving population is now present in the east of Britain. The deer in its` native country is becoming increasingly scarce and apparently we now have a quarter of the worlds population in our country! 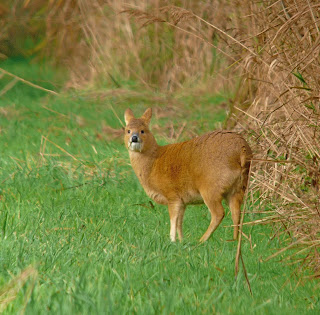