This bird has been on our shores for three weeks, firstly in Dorset for a day and then it gradually made its way eastwards, firstly to Hampshire, then briefly in Cambridgeshire and then it appeared at Ashdown Forest in East Sussex, where it has been present for the past week or so. I had been toying with the idea of going to see it, after all, this is only the third individual to have been recorded in Britain, but my normal partner in crime had already seen the bird when it appeared in Dorset and I didn't really fancy going on my own. On Saturday afternoon Mike Weedon called me to see if I fancied making the trip with him. I debated with myself for about 5 seconds and replied in the affirmative.

I picked Mike up early Sunday morning and after an easy journey we arrived at where the bird had been seen hunting and roosting. There were already at least 50-60 other birders there, scopes and binoculars trained on the valley in front. A couple of enquiries and we learned that the bird had not been seen yet, so we set up our gear to wait. A couple of locals wandered by, asking if there was any news and then informing myself and Mike that they were going to walk to the top of another ridge where you get better views of the entire area. We followed them after waiting a few minutes and soon after we heard a shout from one these birders that they could see the bird perched in a tree approximately a mile and a half away. We reached them and were soon enjoying our first views of a Short-toed Eagle in Britain, okay it was a white blob on top of a tree, but definitely the bird. We started walking closer and after a bit of a trek, stopped approximately 200 metres away form where the bird was perched. The views were unbelievable, it just sat there completely non-plussed by our presence as we watched this incredibly rare bird for about an hour before it took off and started to gain height and eventually went out of view. 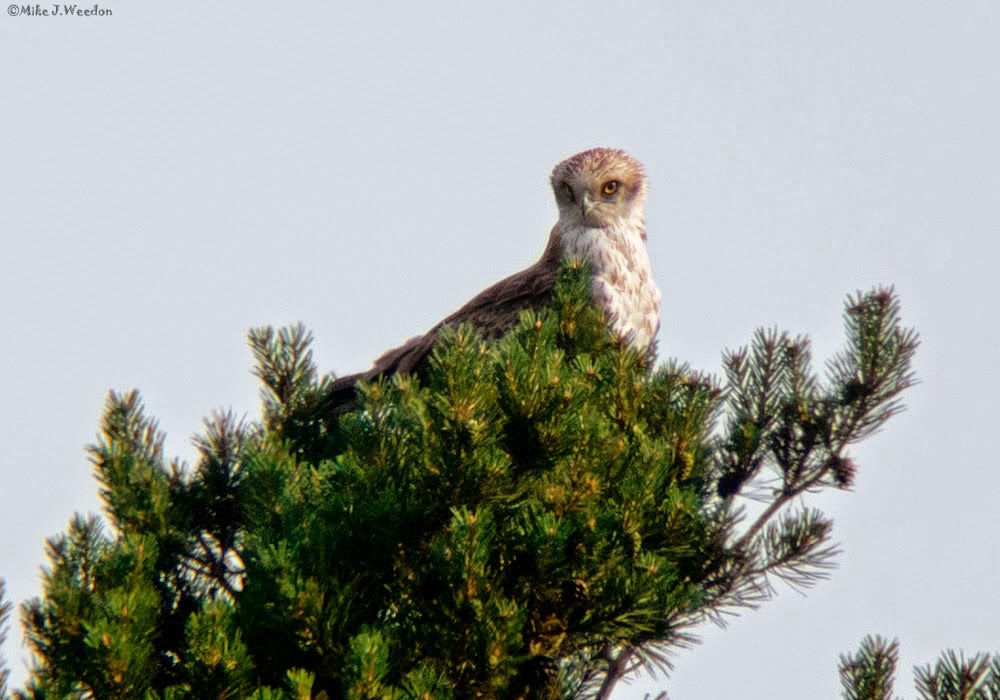 Mike has very kindly allowed me to use the above photo of his in order to show what all the fuss was about. What a bird, a 5-6ft wing span with piercing yellow eyes!

Now for some more of my rubbish efforts!

One more of Mikes,