On arrival at Priory Country Park in Bedford it was noted that all of Bedford had decided to come out for a walk with their children and dogs on a fairly sunny day, the day after the snow had melted. I had a quick scan with my binoculars and noted a small hide on the other side of the lake, so I started to walk in that general direction, soon meeting other binocular clad people who kindly directed me to the birds' haunt. The walk was quick and non-eventful, save some rather odd glances from the dog walking/children playing people of Bedford (how dare someone walk here with some binoculars around his neck, what kind of weirdo is he?). I entered the small hide where a kind gentleman put me straight on to the bird through his scope, a lovely drake fast asleep! A took a seat and waited for the bird to wake up. It put its head up about 4 times whilst I was there, when I managed to get the ropey shots below, but other than those rare times it sat with its head firmly tucked under its wing. 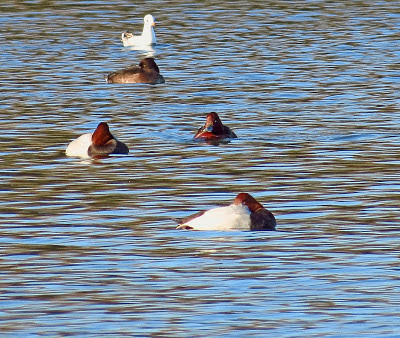 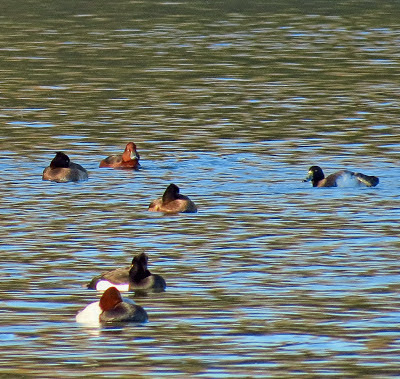 A lovely bird and my first drake in Britain and also a species which my Nephew can pronounce, although his Dad has a slight difficulty!
Posted by John at Wednesday, January 30, 2013 10 comments:

Harry's birds and some Mice

Yesterday was my parents wedding anniversary and also my Mum's birthday, very convenient for Dad to get  married on his Wife's birthday, stops him from forgetting! I spent the afternoon at my parents house, along with my Brother and Sister-in-law and my Niece and Nephew where I was treated to my Nephew showing his burgeoning interest in the natural world, especially birds. Harry is getting to be quite the birder, only 7 and already knowing quite a lot of birds, some common and some uncommon and even correcting his Dad on how to pronounce a Ferruginous Duck (more of which another time)!

My parents have some feeders in their garden which attract the normal fare, but just lately some Lesser Redpoll have been turning up and feeding on the niger seed. On Sunday I was hoping to get some photos of these little birds, but as it was the Big Garden Birdwatch, there was of course no sign. Very disappointing. Instead of this, myself and my Nephew Harry settled down to watch the Blue Tits and Great Tits and even a House Sparrow come to the feeders, which gave Harry a chance to see these birds 'up close' and try his hand at taking some photos. The results below speak for themselves. 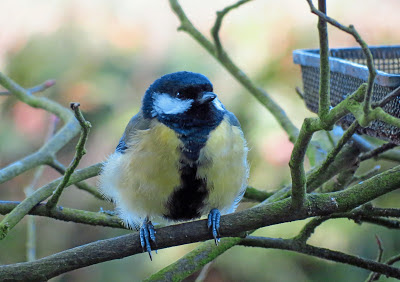 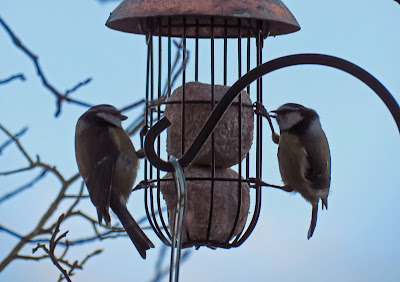 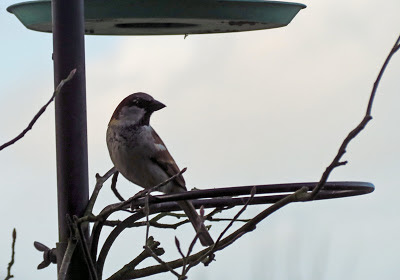 These photos are brilliant, in my humble opinion, especially for a seven year old who hadn't even held my camera before yesterday. What will his future hold?

Another common visitor to Mum and Dad's garden is below, feeding on spilled and sometimes placed bird feed. I think that they are House Mice, but am no expert! 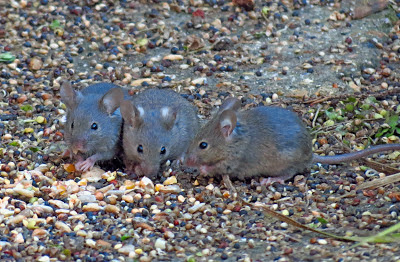 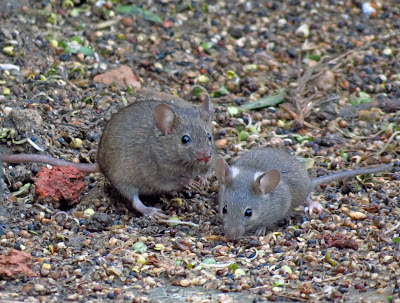 All in all, an enjoyable day with Harry going home with several copies of my old Bird Watching magazines to read. I am going to test him next time.
Posted by John at Monday, January 28, 2013 10 comments: 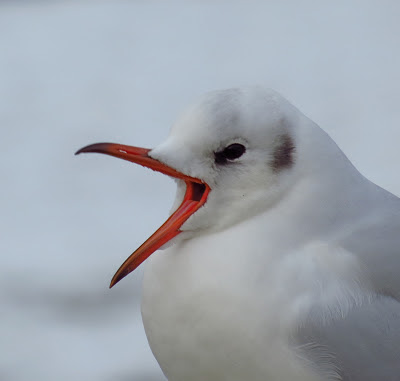 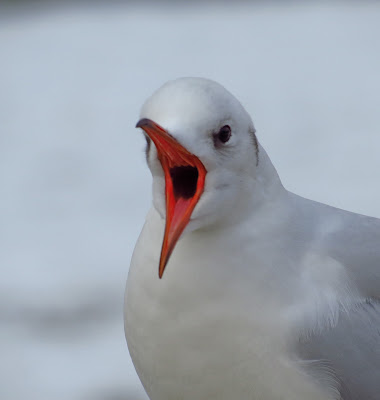 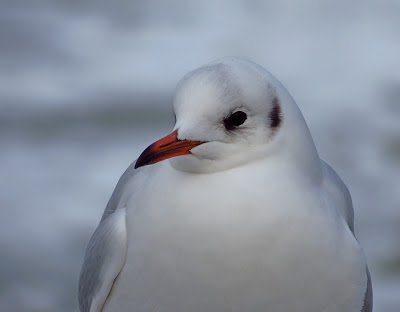 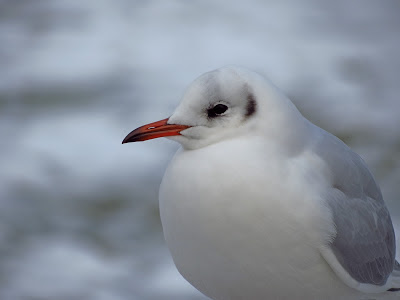 Up close with a surprisingly accommodating Black-headed Gull in its' winter plumage. He looks a bit tired though!
Posted by John at Saturday, January 26, 2013 18 comments:

It shows how hard it is out there for the wildlife when the normally shy Fieldfare starts coming into town gardens looking for food. We had about 5 inches of snow on Sunday night, not a lot compared to others I know, but last night the temperature dropped to minus 11 in my garden. It must have been even colder out in the fens! The morning dawned extremely foggy and frosty and with it there were 6 Fieldfare sitting in the back garden attacking the apples that I had put out in the hope of attracting a Waxwing or three. I came upon an idea that Keith at holdingmoments had by using my bird stand as a spike for an apple and also the spikes that I had put on my nest boxes to deter the squirrels and local moggy. The results speak for themselves, although I am still waiting for that Waxwing! 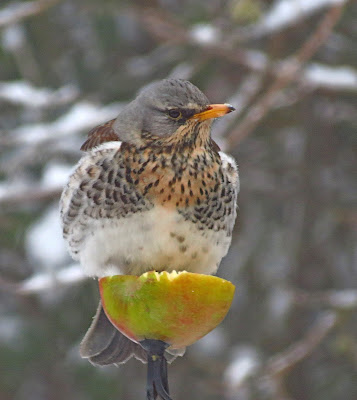 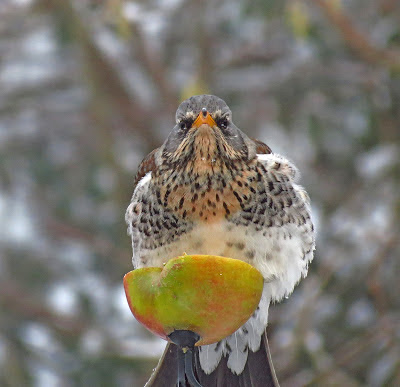 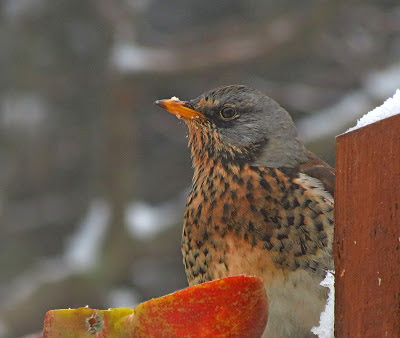 Below is my first attempt at using Windows Movie Maker, what do you think of the results?

There are some trees behind our house, a shelter belt from the main road, which lends itself to wildlife. It is a scruffy mix of native broadleaf trees and bramble in the undergrowth, enabling birds such as Tawny Owl, Sparrowhawk and Jay (amongst others) to nest, but it is sometimes home to mammals. We regularly get up to 5 Hedgehogs visit in the warmer months and we have even had a fox make an appearance in the garden. Yesterday we had a visit from a Muntjac, although not actually in the garden, it was seen in the trees just over the fence. A welcome addition to the flora and fauna of a back garden in Werrington. 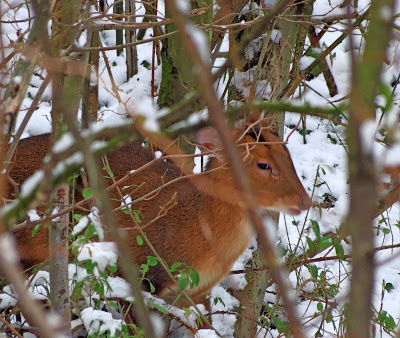 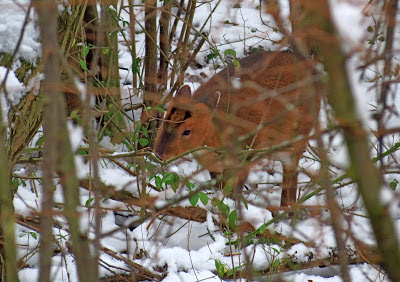 Below are a couple of short videos.

I can't quite work out how to put the two together to just have one video! I am not very technically minded!
Posted by John at Sunday, January 20, 2013 16 comments:

Waxwings are still present in the Peterborough area. Some have been hanging around at Ferry Meadows CP (I counted 19 when I visited yesterday) and a bigger flock have been present in the village of Werrington.

The Werrington flock were seen from a garden in which I was working today, the lady whose garden it was told me that that she had seen them from her back garden since before the New Year, with numbers fluctuating, but mostly in the late teens. This flock duly appeared in its' favoured tree, but I counted at least 40, bigger than was first thought. I was able to pop back later in the afternoon when I had finished my jobs for the day and was surprised at how large the flock had grown. The numbers in these flocks are really hard to gauge with the naked eye, despite numerous counts and so I took a ropey photo of the flock and was amazed at the total! The photo is below, have a guess before counting them, I think you will be as surprised as me when you actually count them (or maybe not!).

The birds at Ferry Meadows CP were seen in far better light yesterday, which enabled me to get some fairly good close-ups, although I leave the final judgement to you, dear reader. As always, click on the images for a larger picture. 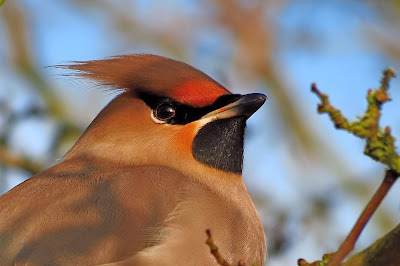 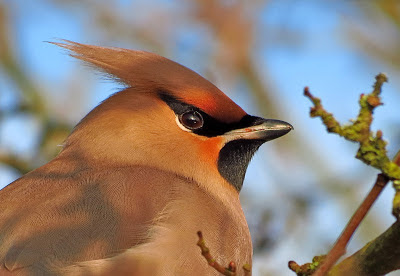 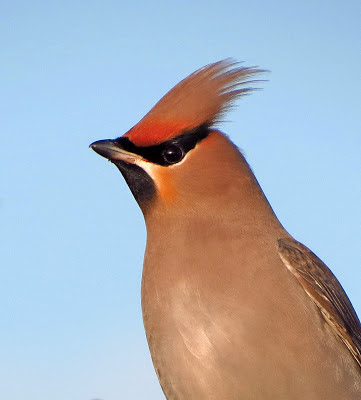 Two weeks into the New Year and I am making my first post. Outrageous! In simple terms I have not been out much over those weeks, except to try and get some sort of work, which is getting harder and harder and consequently other things have become more important.

Today dawned with snow on the ground, no work today then! I dragged myself out of the house and tried to do some birding. I visited a local site where two 'white'winged gulls were seen at the weekend, but today there was no sign of the Glaucous or Iceland Gulls. I carried on regardless, travelling to a local gravel pit to see if I could catch up with an over-wintering Great White Egret that has been seen a few times, on the way seeing two Common Buzzards hunting close to a dyke, most unusual as they were on the ground. No joy there either. Great, this is turning out to be a complete waste of time, I thought! I ventured a bit further up the road, all the while the snow was falling heavier and heavier. I arrived at a little dyke, known locally as the Cross Drain. This is more like it, I thought. Two Green Sandpipers and four Redshank were feeding, accompanied by a couple of Little Egrets, a Kingfisher flew by, a dazzling blue in a world of grey and white, but the icing on the cake came by way of a Water Pipit, my first locally for a couple of years. I ventured out to Baston Fen, but only saw a few Common Snipe probing hopefully by a frozen pool, before the snow forced me back home where the garden was filled with Blackbirds and Reed Buntings.