As bald as a Coot 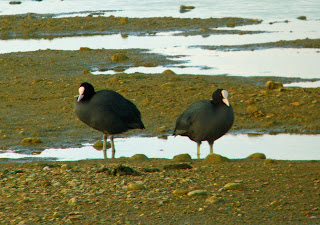 
The Coot is a water bird that is familiar to all of us. Frequently seen in flocks and often in the company of ducks, swans and other water birds, picking up discarded food or food that is disturbed by other birds. It is generally found on lakes, reservoirs, flooded gravel pits and large,slow flowing rivers.

In summer the population is around 46,000 in Britain and approximately 8,600 in Ireland and at present this seems to be stable, if not slightly increasing. In the winter this figure increases with birds that have come from northern and eastern Europe. The oldest bird survived for 18 years.

The saying `as bald as a coot` derives from this bird. The Coot is not bald, but has a white head. In old English the word `bald` has several meanings, one of which is `streaked or marked with white`, hence the expression.
Posted by John at Saturday, February 12, 2011

Email ThisBlogThis!Share to TwitterShare to FacebookShare to Pinterest
Labels: As bald as a coot, Coot (Fulica atra)