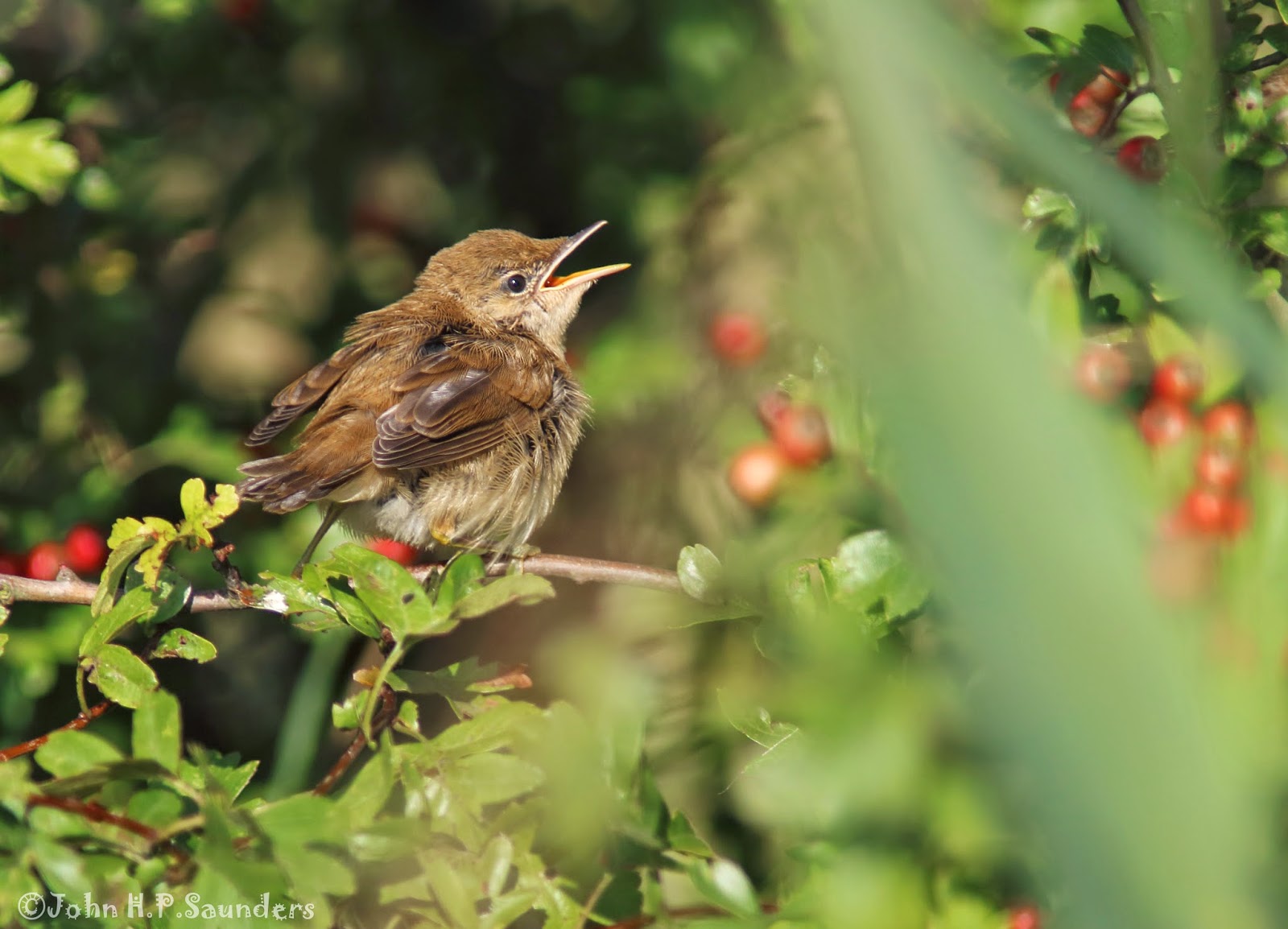 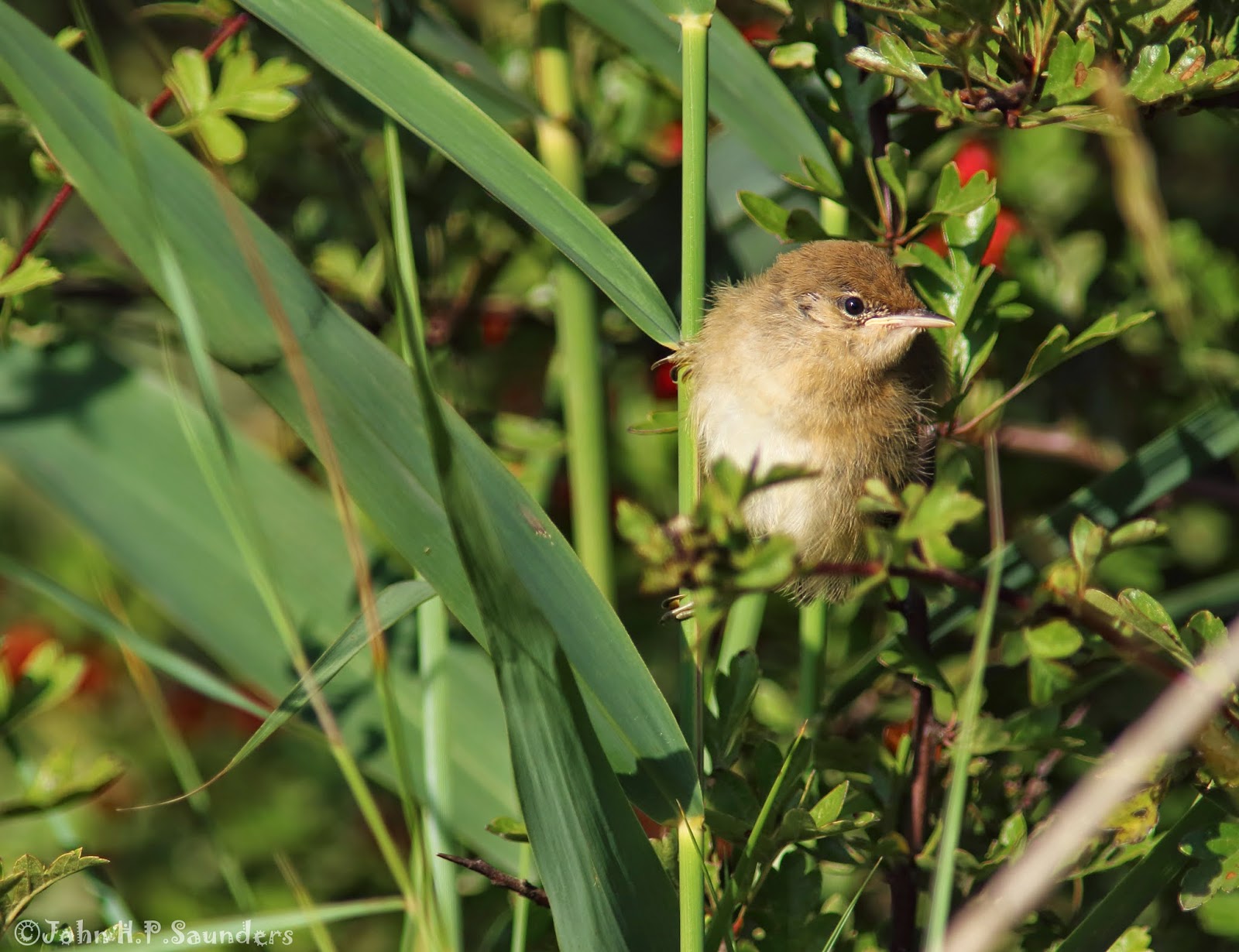 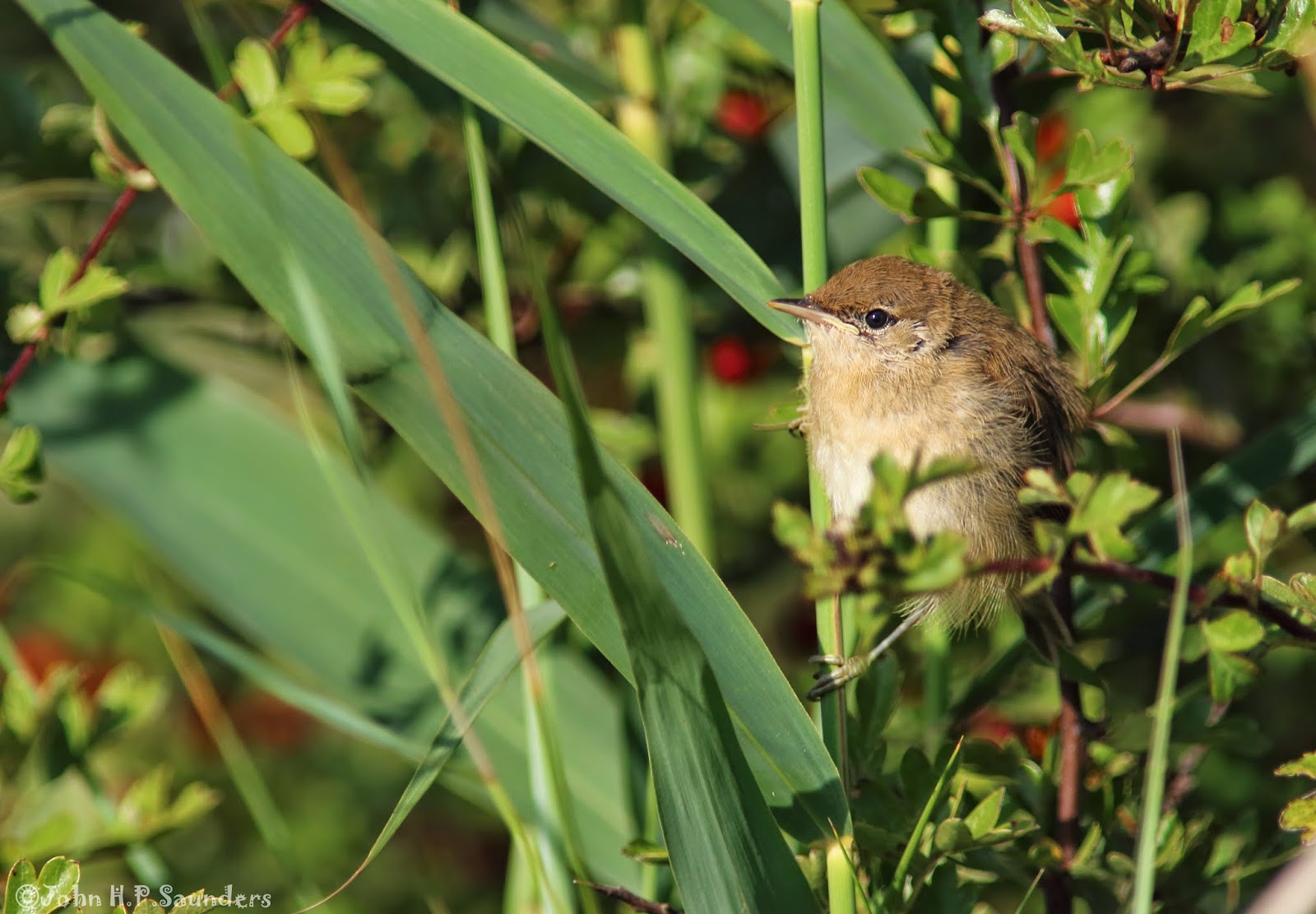 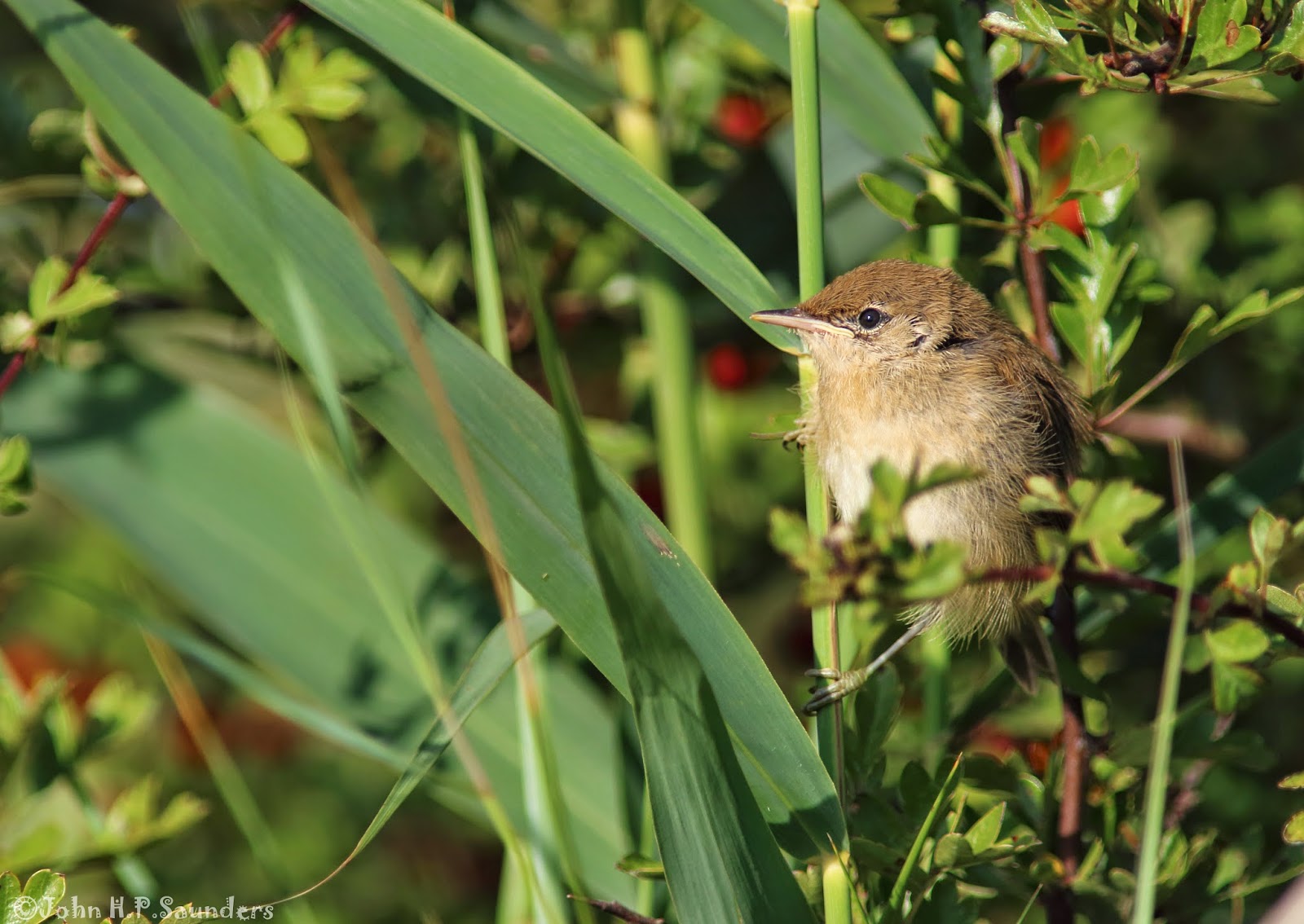 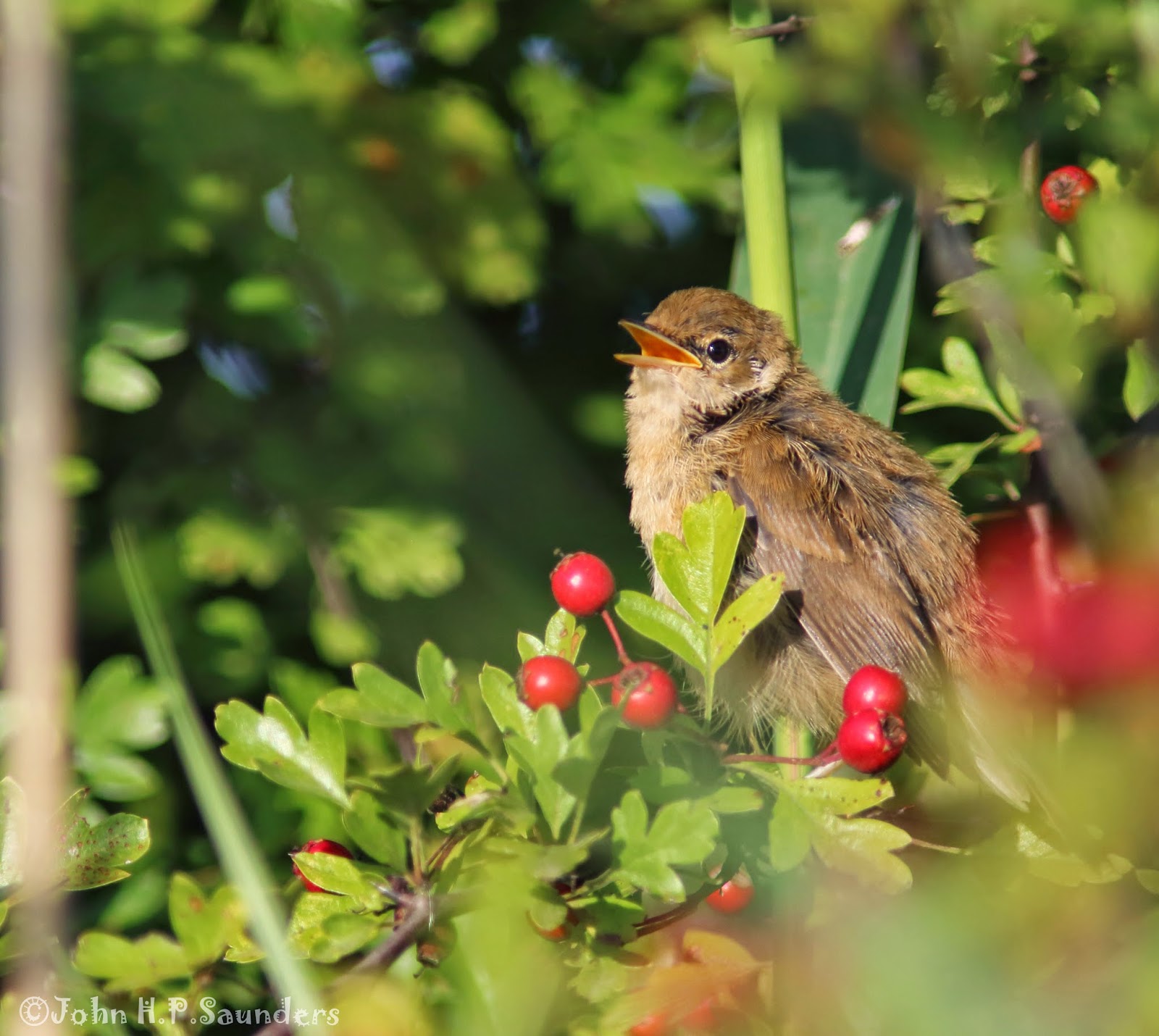 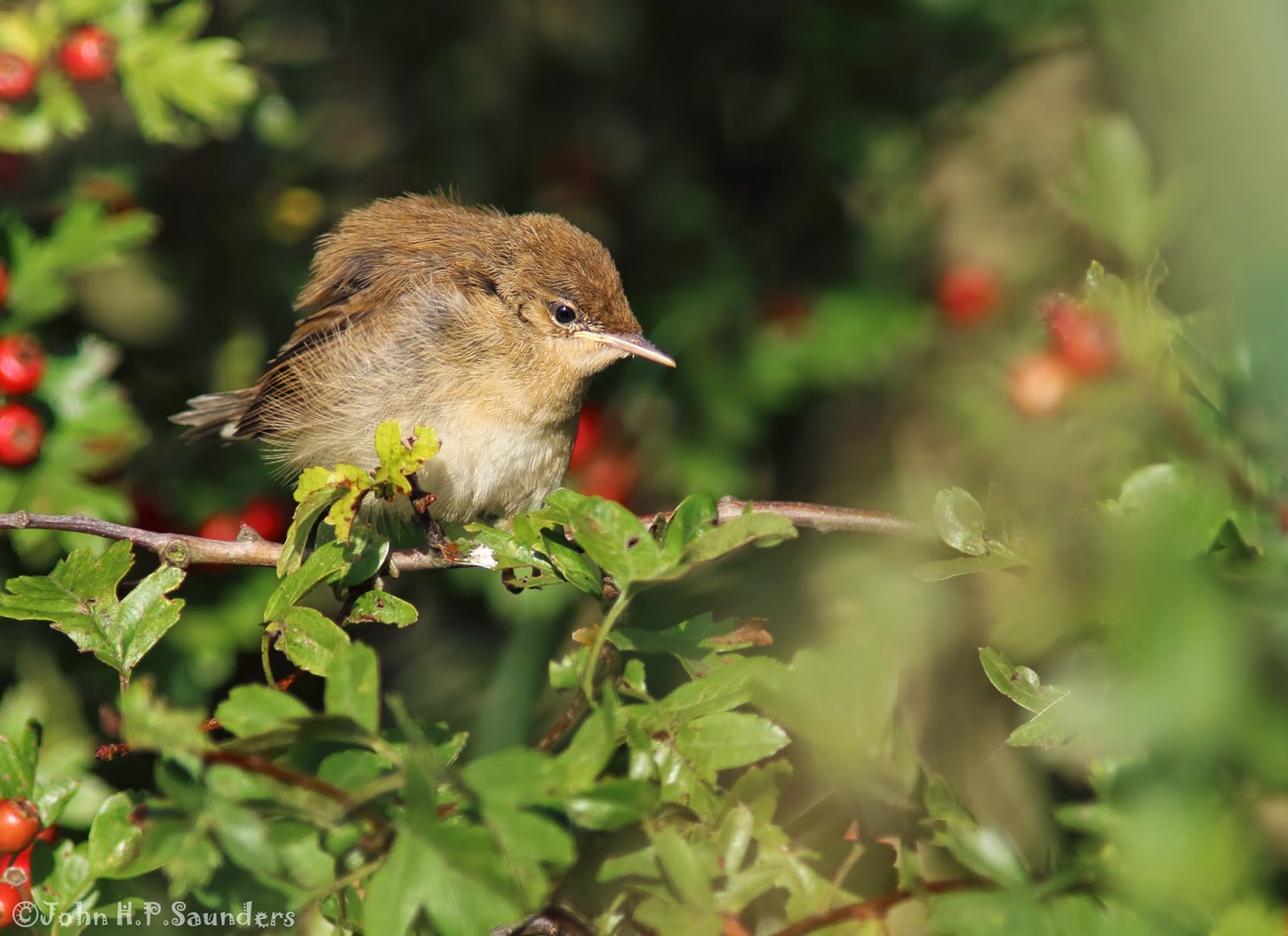 There are still juvenile birds about being fed by their ever willing parents. None more so than these two juvenile Reed Warblers. Notice the short tail on the top photo, almost 'Wren' like.
Posted by John at Wednesday, August 27, 2014 4 comments:

A very dodgy 'record' shot of this 3* mega rarity that has been hanging around the RSPB site of the Ouse Washes in Cambridgeshire for a while now. The Black-winged Pratincole should be on the Steppe, grassland or arable area of the northern Black Sea or Kazakhstan where this species breeds, but instead this particular bird has found itself in the U.K. moving down the east coast and ending up in Cambridgeshire, where myself and Lisa saw it yesterday evening.

I really should have gone for it a long time ago, but the walk mentioned on the report of at least 4km (one way) and the fact that it kept disappearing put me off a bit. What a lightweight, I hear you cry! With it being continuously reported on Monday and the weather set fair, I made up my mind to go and managed to rope poor old Lisa into coming with me.

After a seemingly never ending walk we arrived at the birds favoured location where a friendly birder was encountered and after enquiries told us that the bird was flying around several hundred metres in the sky, but putting on a good show. At that moment he saw something moving, so we both raised our bins and there was my first Black-winged Pratincole flying gracefully through the sky, its movements reminiscent of a Black Tern. Both Lisa and myself got great views through my scope and I managed to get a couple of truly awful record shots until the bird appeared to land in long grass, where it could no longer be seen. As night fell we started the long walk back, but somehow, it didn't seem as long!

I am ashamed to say that I had never seen a Red-backed Shrike in this country. It's a very regular bird, so much so that I have just thought that one day I will see one and haven't 'chased' the species. However, with a very nice male turning up on my doorstep, so to speak, I had to go and see this lifer.

The bird was reported early Saturday morning on Birdguides and a phone call from Mike Weedon confirmed it. I had to wait until after work, hoping that the bird would linger until then. A huge rain storm curtailed my working day by an hour, but unfortunately this storm also stopped the reports of sightings. I left for Baston fen in a positive frame of mind, but after a quick conversation with Mike, my mood darkened somewhat with him telling me that the bird hadn't been seen since 3pm and the last time that it was seen a Sparrowhawk was paying attention to the bird.

I needn't have worried. I arrived at the site and walked the supposed 1/2 mile (felt more like 1 mile) to the birds last refuge and there on top of a hawthorn bush was a rather splendid male Red-backed Shrike being harassed by Reed Buntings. This was obviously annoying the Shrike and so he preceded to hide deep in the hawthorn and refused to come out again. I left as darkness fell, never seeing him in the open again, but very satisfied in having finally 'scratched' the 'itch' of a Red-backed Shrike.