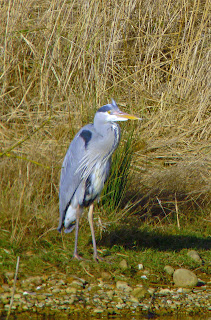 The Grey Heron is a gift for birdwatchers. A tall, grey bird that is elegantly marked and pretty easy to see, I am sure most people have seen one.

The heron has a flaw though, some people don`t like them because they quite like eating fish and people with fish ponds see this as a bad thing. They go to great lengths to stop the heron eating their pride and joy, infact I have heard people boasting about shooting them, poisoning them and even trapping them and watching them die, all because they take advantage of our likeness for having gold coloured fish swimming in a pond in the back garden! They are called by some `vermin`, it is amazing what birds have been called `vermin` over time. Birds such as Osprey, Golden Eagle, Red Kite, Green Woodpecker, Dipper, Jay, Cormorant, Starling, Bullfinch and even the humble House Sparrow have all been labelled as vermin and pests in the past, but why I hear you ask! Interfering with man is the simple answer. These birds have all been shot, trapped and poisoned by man because they feed on things that we would rather have for ourselves or don`t `fit` in to our lives!

The Grey Heron is widespread over the British Isles and there are over 13,000 pairs breeding in Britain and Ireland. They breed in colonies, which are called heronries although they sometimes nest singly.
Posted by John at Monday, February 28, 2011