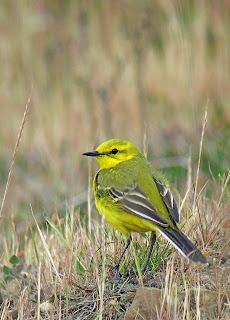 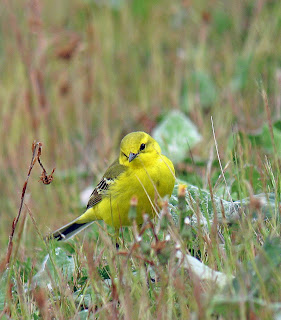 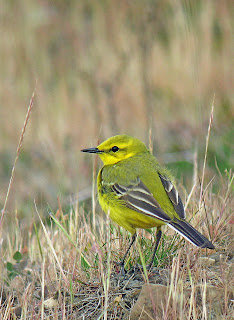 The Yellow Wagtail is a migrant bird that arrives in Britain between late March and mid May, with the brightly coloured males arriving first. In August and September it starts its return flight, first to south-west France and then to Portugal, with some flying to the Bay of Biscay in Spain. From here they then fly to North Africa and across the Sahara desert, some in a single flight which takes 72 hours.

The birds are frequently seen with cattle and horses in their search for food, which is a mixture of small invertebrates such as flies and beetles. These are normally caught around the feet or dung of livestock.

The male (seen in these photo`s) is an extremely brightly coloured bird, having bright yellow underparts and face with olive-green upperparts. The head markings do vary between geographical races, with the British race having a yellow head. The nearest other race is from Europe and has a blue head, indeed this race can often be seen in Britain. The female is a lot duller with a brown back, pale throat and a pale eye stripe.

This is another farmland birds which has mixed fortunes of late with some surveys showing declines of between 67% and 90%, with most of this occuring since 1978. Their range in Britain is contracting, with the loss of mixed farming, land drainage, conversion of pasture to arable and changes in farming practice are all possible causes of this.

In the Peterborough area we are fairly fortunate in that we seem to have a fairly healthy population with the Nene Washes and Maxey GP (where these photo`s were taken), to name a few, being good places to see this stunning bird.
Posted by John at Thursday, June 02, 2011