Another year dawns and so with it I begin my yearly quest for a PBC list. I try and see as many species of bird within the Peterborough Bird Club recording area, last year I managed to get 175 species, seeing such beauties as Cattle Egret, Great (White) Egret, Waxwing and Green-winged Teal to name a few, although I missed out on Gannet and Raven. My record is 179, a total I got in 2009, so I would like to reach the heady hights of 180, who knows?

Below are a few shots of a Great Spotted Woodpecker. This is our most common woodpecker with between 25,000-30,000 breeding pairs, although it too has had hard times being all but non-existent in Scotland until 1887 when it re-colonised the country. In more recent times it has benefited from the dead wood resulting from Dutch Elm Disease.

It is similar in size to a Blackbird, with the male (shown here) having a red patch on the back of the head (the female has none and the juvenile has a red centre to its` crown). You may well hear it `drumming` soon, something it does in place of a song and it takes place in late winter and early spring. It is done by drumming its` bill on a branch and lasts for about 5 seconds and accelerates before fading away at the end. 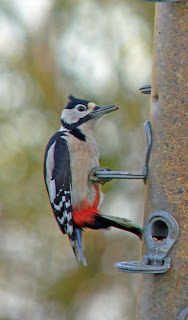 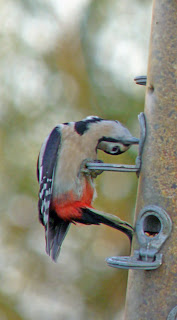 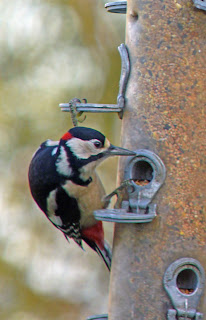