We are lucky in the Peterborough area to have The Nene Washes RSPB reserve on our doorstep. This site is a nationally important one for breeding wading birds such as the Common Snipe and the Black-tailed Godwit. Each year these birds breed on this area of managed floodland and pasture which gives people a chance to view these amazing birds at quite close quarters. 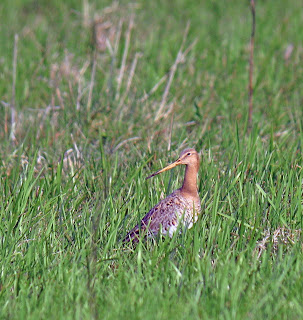 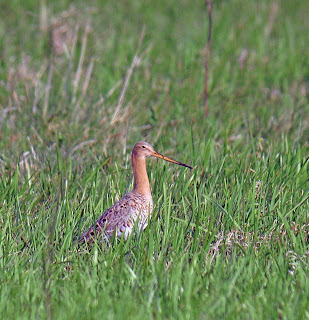 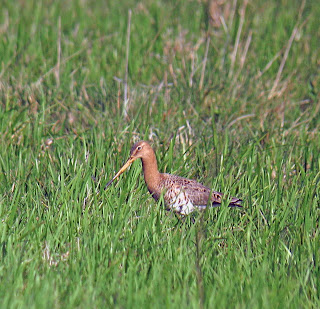 The Black-tailed Godwit is a large wader with a long, straight bill, long black legs and a long neck. In Spring the head, neck and breast are chestnut red, with the belly being white with dark bars and the back is mottled grey/brown.


By 1855 this bird had stopped breeding in Britain, but in 1952 nesting started at the Ouse Washes and then some birds of the Icelandic race began nesting in Scotland. The RSPB have given this bird special protection and consequently a few more breeding colonies have become established. In 2002 around 50 pairs nested in Britain, mostly on the Nene and Ouse Washes (both RSPB reserves). The bird does, however migrate to this country in the winter, indeed the estimated numbers that do over-winter are around 12,000 in Britain and 8,000-10,000 in Ireland. In Europe this birds numbers are declining due to land drainage.
Posted by John at Thursday, April 07, 2011