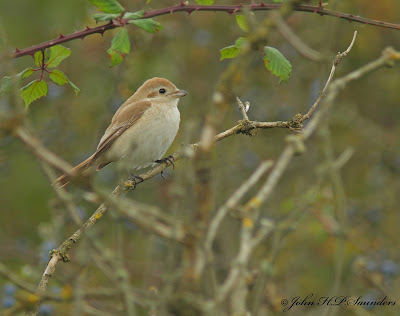 Over the past couple of weeks the wind has been coming from the east and with it all sorts of birds. The Norfolk coast has been littered with rare and scarce migrants, a lot of which I have never seen before. Pallas's Warblers, a couple of Hume's Leaf Warblers, a Blyth's Reed Warbler, several Red-flanked Bluetails, an Olive-backed Pipit and at least 3 Isabelline Shrikes were all on the radar and with Lisa having a rare weekend off and Sunday being free for me as well, we decided to visit the county in order to try and see some these eastern beauties and even treat ourselves to an overnight stay in Little Walsingham.

The first bird I had my eye on was a very obliging Isabelline Shrike that had been showing all week at Beeston Common just outside Sheringham. We arrived at the site with drizzle in the air and a thick grey sky, but that hadn't deterred other birders as the rather large parking area was full with cars. Luckily someone was pulling out just as we got there, so we managed to pull in and make our way to the birds' haunt. Where was everyone, we wondered and more importantly, where was the bird?! We saw a large group of birders in the distance all staring intently at a row of hedges, ah, that must be the site I thought, but no, the Shrike duly appeared on top of a hawthorn bush not 40 yards in front of us. Lovely views were had, the bird even ventured forth to catch a few wasps, but the group of birders still continued to stare into the aforementioned hedges. A couple of birders walked past us and I mentioned the fact that the Shrike was showing in front of me, but they weren't interested in this rare bird from the east, they had come to see a Long-eared Owl that was roosting nearby. That's what the group were looking at! It seemed quite strange to me that there were far more birders staring at a brown blob in a dense hawthorn hedge than there were at this very showy Shrike. Now don't get me wrong, a Long-eared Owl is a great bird, but a non-moving, brown blob can only keep me entertained for so long, especially when an Isabelline Shrike is flying about, hunting various insects, causing panic to the local Robins and Blackbirds and being thoroughly entertaining.

We stayed for a while watching this 1st-winter bird and then decided to venture west in order to 'bag' the other birds that were on show. That tale, dear readers will follow shortly, but for now I will leave you with some other images of the Isabelline Shrike. 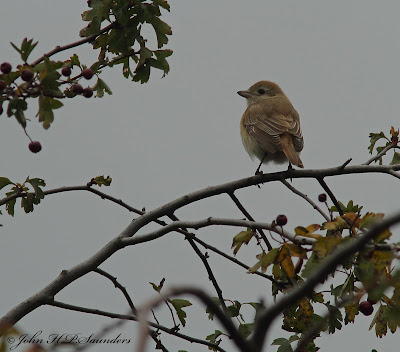 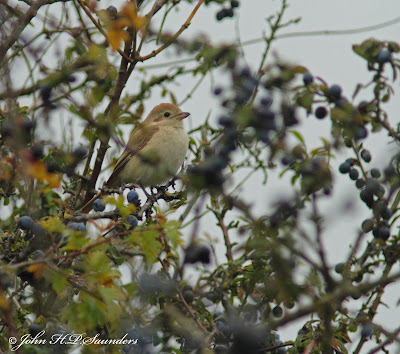 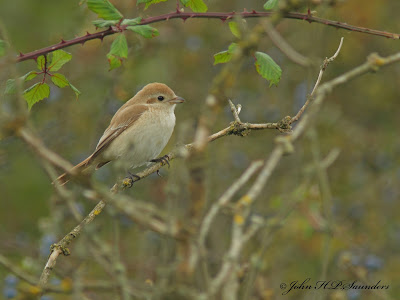 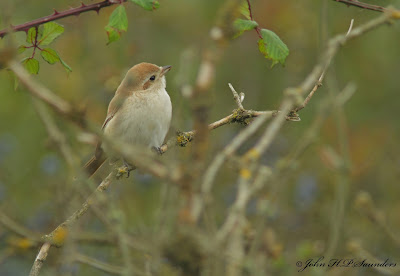 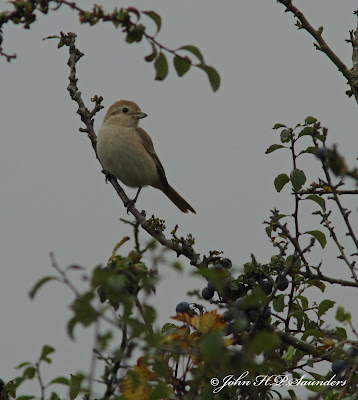