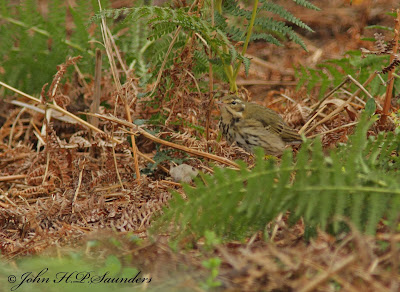 We made our way to Muckleburgh Hill and on arrival found the parking situation to be the same as that at the Shrike site, but with only a small car we managed to get a space. We made our way to the hill, passing various birders informing us that patience was the key and the bird will show eventually. We arrived and the bird was right in front of us, not ten feet away! Skulking through the bracken and seemingly oblivious to the hoards. I rattled off a couple of shots in case this was my only chance and then the bird flew. Upon reviewing my photos, I realised that I had got the completely wrong settings and everything was completely blurred (more so than normal anyway!), gutted! We waited for a bit to see if the bird would return and in about 10 minutes it did. A bit further away and again skulking about, low to the ground, but great views were had with the bird feeding and even doing a bit of preening. The bird then seemed to disappear behind a clump of bracken and vanish. It was at this point that we decided to cut our losses and go for the next bird(s).

We drove to Wells Woods, parked up and paid the rather pricey sum of £3 for 2 hours (I thought it was a bit dear anyway!). We walked to the drinking pool where a 1st-winter/female Red-flanked Bluetail had been showing and after a bit of a wait and several Goldcrests later the bird showed on the far side from us, always on the move and in dark cover, but the blue tail was unmistakeable. Unfortunately photography was not an option at that distance and with very poor light and so I contented myself with views of the third lifer in a day. Someone announced that the Hume's Leaf Warbler was showing and so we all moved off along the main track, perhaps I will get my fourth lifer I thought! A small group of birders were standing just off the path, but the group kept going, but we stopped and asked what these people were looking at, a Pallas's Warbler came the reply. There in the top of an evergreen oak was a gorgeous Pallas's Warbler, flitting in amongst the foliage, calling occasionally and showing its rather fine central crown stripe, with it even hovering and showing the yellow rump. Again, I had to be content with views. We then made our way the short distance to the Hume's site and there, in amongst a Hawthorn bush was the bird, calling, but never showing that well. Five out of five! This was definitely a day to remember! The only 'dip' was the Blyth's Reed Warbler, a notoriously skulky bird that was definitely not showing itself whilst we were there, it may have done if we had more time, but the two hours were almost up and hunger got the better of us. We left Wells Woods and went into the town of Wells where fish and chips were enjoyed.

Quite a day, the sort of day that makes Norfolk famous amongst birdwatchers. When will it be repeated, I wonder?!

I am afraid that the only photos I have for your perusal are those of the rather fine Olive-backed Pipit, a superbly marked individual and my 'bird of the day'. 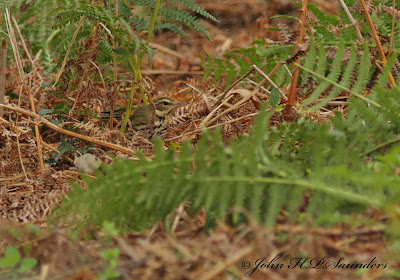 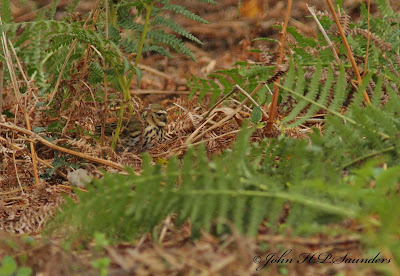 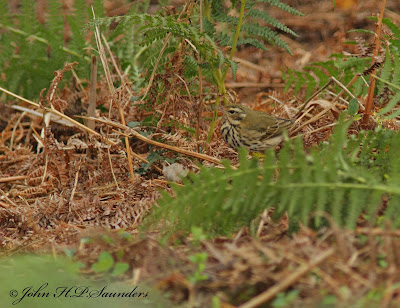 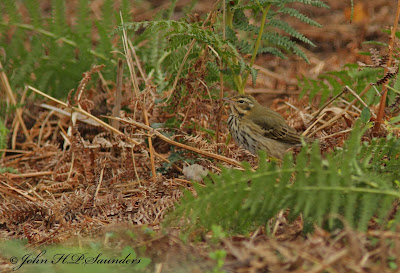 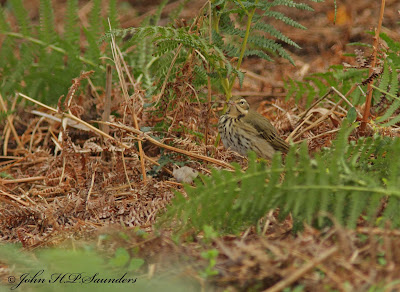 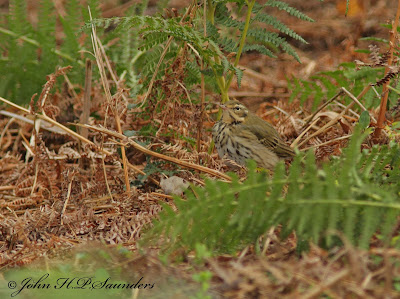