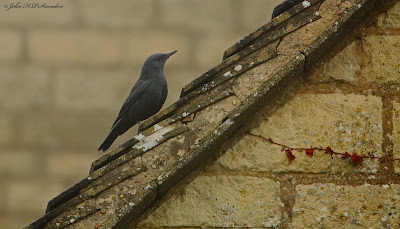 This bird appeared a week before Christmas in the back garden of a house in Stow-on-the-Wold in Gloucestershire, but the news of its' appearance wasn't released until the 27th December 2016.

Now, this bird is pretty rare, only 5 or 6 other records of the species in the U.K. and these have all been in the spring/summer months, so one turning up in mid-winter on a housing estate in the south-west of England has raised a few eyebrows. Some have called this bird a definite escapee (i.e. not a truly wild bird), others have said 'innocent until proven guilty'. Regardless of its' credentials a big twitch has ensued with hundreds of birders descending on this normally quiet part of the Cotswolds.

My friend Chris Orders and I had been planning to make the journey all last week and on Sunday those plans came to fruition. We arrived at the car park at around 9 o'clock and paid for 6 hours parking, rather extravagant, but we had no idea how long it would take us to see the bird. Upon arrival at Fishers Close, there was the bird on top of a chimney, slight waste of parking money then! The bird showed well, even in the fog and murk of the morning, seeming to stick to a pattern of feeding in the original back garden, then flying to a nearby roof and then flying to the chimney where we originally saw it. It looked a pretty sickly individual, constantly coughing and when it flew it didn't look overly comfortable. A small group of twitchers came and went, but we stayed, partly because we had paid for the car park already and partly because we wanted to see if the weather would cheer up in order for photography. The fog lifted eventually, but it continued to be cloudy and started spitting. I managed to get a couple of reasonable shots, but with the bird sticking to its' rooftop home for long periods we decided to make our own way home.

The jury is still out on the acceptance of this bird and to be honest, both Chris and I had a gut feeling of more 'plastic' than 'fantastic', only time will tell. 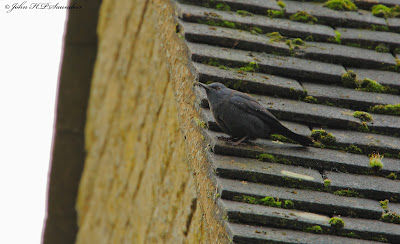 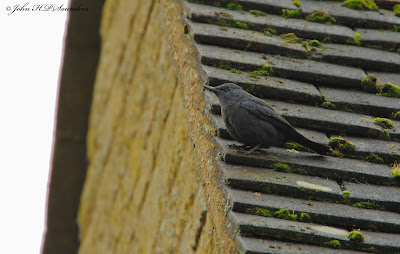 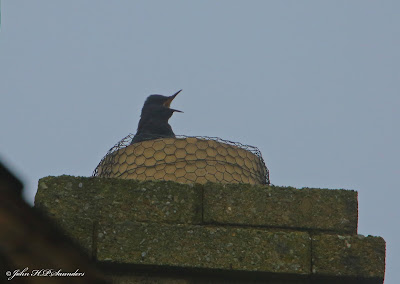 The bottom photo I have included just to show the birds' orange mouth, shown during one of its' coughing fits.

Thanks, as ever to Chris for driving and providing lunch. Perhaps this year I will be blogging with more frequency than last.
Posted by John at Monday, January 09, 2017