Every year there are approximately 10-20 records of this species in Britain, but this is the first time I have seen one, what is known as a`lifer`. While I was at Rutland Water there were also 5 Smew, 3 Goosander and a Red-breasted Merganser plus a lot of more common wildfowl, but the american was what I went for and now I can put another `tick` in my book! 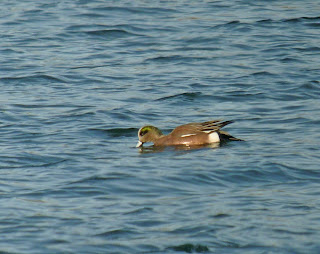 And now a break from normal proceedings to announce that my humble blog has been presented with an award from my friend Gary. It is the `Honest Scrap` award;

Apparently I am now supposed to tell you some facts about myself, but as I am extremely dull and ever so humble, I have found this a bit difficult! Here goes anyway!

1. I do not follow football (soccer). I know this is extremely hard to believe, being male and English, but I just find it dull and the hype that surrounds it is awful! No-one was happier than me when England failed to land the World Cup!
2. I don`t like to see birds in cages. Birds were given wings for a reason and I don`t think that reason is to be shut in a cage!
3. I hate flying, it makes my arms tired! Ha Ha! Seriously, I don`t like flying!
4. I am an uncle to two fantastic children, Olivia and Harry. Great kids, who I am trying to educate in the ways of Birdwatching! (unsuccessfully at the moment)
5. I once played cricket with an England international and a New Zealand international.

There you go, five facts and now to pass this award on to others.

1. The Blogger Formerly Known As.... who started me on this blog adventure and is a constant source of advice, plus I think this is one of the few awards that they have yet to receive!
2. The Whimsical Gardener who takes fantastic photographs of amazing places.
3. Mustang Sally who is also a fantastic photographer.

I would like to pass this on to Bazza, but he has mentioned that he no longer wishes to accept awards, so I just thought I would provide a link anyway!
Posted by John at Saturday, December 11, 2010