One of natures' spectacles in the winter months is surely that of the flocks of Starlings going to roost, the 'whirling' patterns of thousands of birds as they perform a ballet of true wonder and beauty.

In the Peterborough area we have a couple of these roosts at the moment, one at Deeping Lakes and one at Maxey gravel pits. Both number thousands of birds, but it was at Maxey that I found myself this evening. A few other local birders had also come to view the spectacle and as the numbers of birds grew and grew we were all left speechless, well, almost! 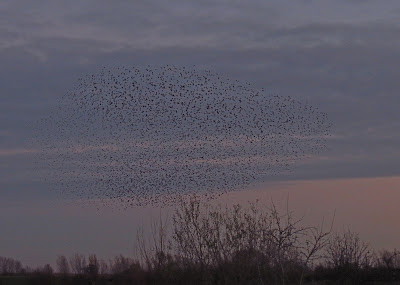 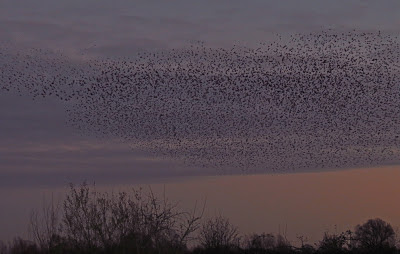 Below are a couple of short videos, not the greatest pieces of camera work you are ever likely to see and there are a couple of 'voices off', but hopefully they will give you an idea of what was on offer.

These numbers do give a slightly false impression of the state of Starling numbers at the moment. This year alone, over 40 million of these birds have vanished in Europe. No one knows the cause, but changes in agricultural practice are being mooted as one of the prime reasons. One thing is for sure, if something is not done to reverse the catastrophic fall in numbers of this bird, sights like those above will be a thing of the past.
Posted by John at Saturday, December 08, 2012