This post may cause a few cross words aimed at yours truly, indeed I have already had some words passed to me on other sites, but I will still go ahead and post it.

A small goose has been present on the Norfolk coast since November, a bird that courts controversy when it appears in this country, especially the south half. This bird is the Lesser Canada Goose, or to be more precise, the Richardson's sub-species of Lesser Canada Goose, Branta hutchinsii hutchinsii. This bird has recently been split from its larger cousin, the Greater Canada Goose (or just Canada Goose to you and me), something I was unaware of and so I hadn't bothered going to see the bird in Norfolk as I didn't think that it was a viable tick. After looking through a few websites and books I discovered the split and after a conversation with Chris Orders, decided to make the trip.

All seems fine, so far. The reason for the controversy is that the Lesser Canada Goose is a pretty rare wild bird in this country, most accepted records are in Scotland, although there has been one in Norfolk in 1999, but is a bird that is kept in wildfowl collections and sometimes escapes. We were worried that this bird wasn't wild, but Chris spoke to a friend who is 'up' on this sort of thing who said that the bird was showing good credentials, so we thought, what the hell.

We arrived at the birds preferred area, but no Richardson's/Lesser Canada Goose, great, another wild goose chase! After two hours of walking along some rather unforgiving shingle we decided to drive back towards Cley to see if we could see any 'little' geese. We stopped in a laybay and scanned a flock of Brent Geese, no Richardson's. A person we had met previously saw us looking and pulled over to tell us that there were several birders looking at a flock of Brents and Canada Geese on the East Bank, very kind of him, so we went there. On arrival several birders were on the little blighter and so we got our first view. A small goose, about two-thirds of the size of a Canada Goose, with a shorter bill, steep forehead and 'flat' appearance of the top of the head. The breast is also slightly darker. We walked along the bank to see if we could get any nearer for some shots, with the geese always moving that bit further away in front of us, they seemed pretty jumpy. Chris digiscoped, I took some with my camera at full zoom and tried a bit of digiscoping, but mine were all rubbish. The results are below. 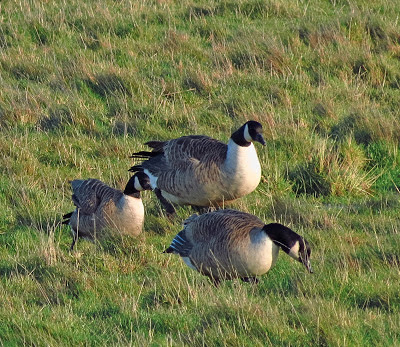 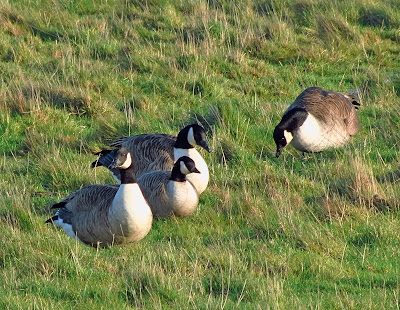 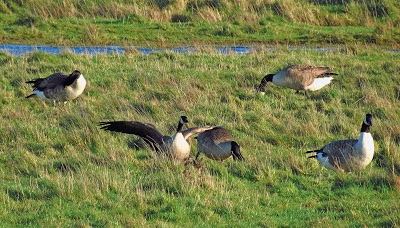 My efforts are above, which hopefully show the goose well. The smaller bird in the top two photos with the bottom photo showing the bird with its wings open.

Lots of birders were there looking at this bird, all happy in 'ticking' it as a wild bird. I think the debate will carry on as to whether it is a wild bird or not, with the final say going to the BOU. An interesting article about this bird and other Lesser Canada Geese can be found HERE, just scroll down to the section referring to this bird, you may find it interesting reading. Whatever the outcome, it was good to see the bird and until otherwise notified, it's on my list! (Sorry if this offends anyone) A short video (using my camera) of the bird swimming is below.


Whilst we were in Norfolk we visited Titchwell, although on a windy, cold day with squally showers, it wasn't the greatest place on earth. We saw a rather strange Golden Plover amongst the flock, almost completely white and an adult Yellow-legged Gull, but other than that, just the normal waders and Marsh Harriers.

We left whilst being treated to a lovely sunset.